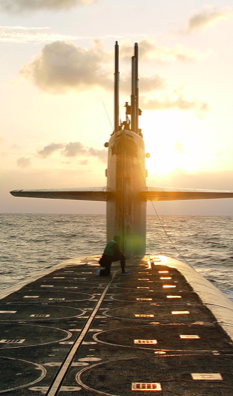 Image courtesy of the U.S. NavyA commander in the U.S. Navy pleaded guilty Tuesday to federal bribery charges for accepting money, gifts, travel, and prostitutes from a contractor who supplied services to the Navy in Asia.

Sanchez was arrested in November 2013.

The DOJ alleged that Glenn Defense Marine Asia (GDMA), a Singapore-based contractor that serviced U.S. Navy ships and submarines throughout the Pacific, used bribery to win more than $20 million in contracts.

Sanchez pleaded guilty to conspiracy and bribery in an appearance Tuesday in federal court in California.

From 2008 to 2013, Sanchez was assigned to the U.S. Navy’s Seventh Fleet in Asia. Beginning in September 2009, he “entered into a bribery scheme with Leonard Glenn Francis, the CEO of GDMA,” the DOJ said.

In return, Francis gave Sanchez cash, travel and entertainment expenses, and the services of prostitutes, the DOJ said.

The bribery scheme continued for about two years until September 2013, according to admissions Sanchez made in his plea.

Francis was charged in a complaint unsealed in November 2013. He has pleaded not guilty to conspiring to commit bribery.

In his plea, Sanchez said Francis paid for his five-night stay at the Shangri-La, a luxury hotel in Singapore, and for travel from Asia to the United States. The trip cost about $7,500. Francis also arranged and paid for prostitutes for Sanchez in Singapore and elsewhere in Asia.

Leslie Caldwell, chief of the DOJ’s criminal division, said Tuesday: “Commander Sanchez sold out his command and country for cash bribes, luxury hotel rooms, and the services of prostitutes.”

“After today’s guilty plea,” Caldwell said, “instead of free stays at the Shangri-La hotel, Sanchez is facing many nights in federal prison.”