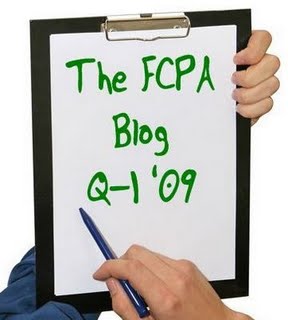 We count seven Foreign Corrupt Practices Act enforcement actions since the start of the year, including indictments, pleas and settlements, along with one newly disclosed investigation. Four of the enforcement actions involve individuals, and four relate to KBR. By this time last year, there had been just a couple of new enforcement actions (2008 finished with eleven organizations and twenty-six individuals being either charged with new FCPA offenses, settling enforcement actions, or having charges amended, reinstated or affirmed). Here’s this year’s rundown so far:

Two U.K. citizens who allegedly helped Houston-based Kellogg Brown & Root (KBR) bribe Nigerian officials were indicted for violating the FCPA. Jeffrey Tesler, 60, of London, England, and Wojciech Chodan, 71, of Maidenhead, England, were indicted on Feb. 17, 2009 by a federal grand jury sitting in Houston. The Justice Department unsealed the indictments after Tesler’s March 5 arrest by British police, who acted at the request of U.S. authorities. Chodan hasn’t been arrested but faces an outstanding U.S. warrant. The DOJ said it will try to extradite Tesler and Chodan from the U.K. to stand trial in the U.S.

Tesler, a lawyer in London, and Chodan, a former employee and consultant of KBR’s U.K subsidiary, were charged with one count of conspiracy to violate and ten counts of violating the FCPA. They face up to 55 years in prison if convicted on all counts. The indictment also seeks forfeiture from them of more than $132 million.

The bank said in a short statement that “it has recently uncovered actions initiated by an employee based in China in an overseas real estate subsidiary that appear to have violated the Foreign Corrupt Practices Act. Morgan Stanley terminated the employee, reported the activity to appropriate authorities and is continuing to investigate the matter.”

In December 2008, the China-based managing director of Morgan Stanley Real Estate in Shanghai, Garth Peterson, left the bank. And Morgan Stanley’s global head of property investing, Sonny Kalsi, was placed on administrative leave. Some of Morgan Stanley’s property projects involved investments with government-linked Chinese enterprises. Several high-ranking Chinese officials from Shanghai have been arrested in recent years for corruption in connection with deals in the property market.

Houston-based global engineering firm Kellogg Brown & Root LLC (KBR) pleaded guilty to a five-count criminal information, with one conspiracy count and four substantive counts of violating the Foreign Corrupt Practices Act. KBR agreed to pay a $402 million fine, the second largest criminal fine for an FCPA violation, following Siemens’ $450 million penalty in December 2008. KBR’s parent company, KBR Inc., and its former parent company, Halliburton Company, also settled civil FCPA charges with the Securities and Exchange Commission, agreeing to be jointly liable to pay $177 million in disgorgement. The SEC’s complaint alleged that Halliburton’s internal controls failed to detect or prevent the bribery, and that its records were falsified to cover up the illegal payments.

KBR admitted paying Nigerian officials at least $182 million in bribes for engineering, procurement and construction contracts awarded between 1995 and 2004 to build liquefied natural gas facilities on Bonny Island, Nigeria. The contracts to an international joint venture led by KBR were worth more than $6 billion. KBR’s former CEO, Albert “Jack” Stanley, pleaded guilty in September 2008 to conspiring to violate the FCPA. His sentencing is scheduled for August 2009.

The SEC filed a settled civil injunctive action in the U.S. District Court for the District of Columbia against New York-based ITT. The complaint alleged violations of the FCPA’s books and records and internal controls provisions. ITT agreed to disgorge $1,041,112, together with prejudgment interest of $387,538.11, and pay a $250,000 civil penalty. The SEC said ITT self-reported the violations, cooperated with the SEC’s investigation, and instituted remedial measures.

The violations resulted from payments to Chinese government officials by ITT’s wholly-owned Chinese subsidiary, Nanjing Goulds Pumps Ltd. (NGP). From 2001 through 2005, NGP paid about $200,000 in bribes to employees of Chinese state-owned enterprises. ITT generated over $4 million in sales through the bribes and made profits of more than $1 million.

Richard Morlok, 55, the former finance director of California-based Control Components Inc., admitted that from 2003 through 2006, he arranged corrupt payments to foreign officials of about $628,000. The payments, usually made through agents, went to employees at state-owned enterprises in order to assist in obtaining and retaining business for his company. He was charged in a one-count information with conspiring to violate the FCPA. He faces up to five years in prison. His sentencing is scheduled for July 2009.

Morlok said that during a 2004 audit he provided false and misleading information about Control Component’s commission payments to agents. The company is owned by British-based IMI plc, which trades on the London Stock Exchange under the symbol IMI.L.

Mario Covino, 44, an Italian citizen living in Irvine, California and formerly the worldwide sales director for Control Components Inc. (see Richard Morlok above), pleaded guilty in federal court in Santa Ana to a single count of conspiring to violate the FCPA by paying at least $1 million in bribes to foreign officials in several countries. He’s cooperating in an ongoing federal investigation and waiting to be sentenced in July 2009. He faces up to five years in prison.

Covino arranged for company employees and agents to pay about $1 million to employees at state-owned foreign enterprises from March 2003 through August 2007. He said his company made about $5 million in profits from the business obtained through the bribes. According to the plea agreement, some of the corrupt payments went to officials at Petrobras (Brazil), Dingzhou Power (China), Datang Power (China), China Petroleum, China Resources Power, China National Offshore Oil Company, PetroChina, Maharashtra State Electricity Board (India), KHNP (Korea), Petronas (Malaysia), Dolphin Energy (UAE) and Abu Dhabi Company for Oil Operations (UAE).
_______________

Click on the party names for the original posts, with links to the charging documents, settlements, and news and litigation releases.
.