The Woolf Report Tells No Tales 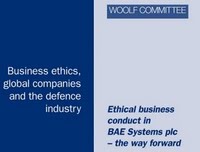 The message in our inbox yesterday said: You may find this interesting if you haven’t seen it already. It’s the Woolf Committee Report on BAE — released this morning. It’s breathtaking in the extent to which they have focused stubbornly on the future and avoided a meaningful review of past conduct. I know that was the basis upon which the committee was formed, but it’s difficult to imagine how future conduct can be determined without past wrongdoing explored.

Our correspondent is a fine compliance professional with one foot in Washington and the other in London, so we took the warning seriously. That is, we lowered our expectations. But even so, the report was disappointing. Not only does it avoid dealing with anything historical or factual, but it also never says that public corruption is wrong. That it’s a crime that always cheats a national treasury somewhere, perverts the marketplace, and victimizes the citizens. There was none of that.

Instead, the report from the 75-year-old former lord chief justice, who was commissioned in June 2007 by BAE at a wage of £6,000 a day, says over-and-over that BAE’s reputation is hurt when the company is caught doing bad things, and that damage to its reputation is in turn bad for its business. Beyond that, the report’s action items could have been cut-and-pasted from compliance boilerplate — creating an impression that the Woolf Committee (Lord Woolf, Philippa Foster Back, Sir David Walker, Dr Richard Jarvis and Douglas Daft) either didn’t actually speak with anyone who works at BAE, or didn’t find anything they said notable enough to be repeated.

The Guardian, meanwhile, posted a short list of provocative questions that remain unanswered:

· Did the company pay 31% “commission” into a Swiss account on a sale to the African state of Tanzania?

· Did BAE employ Count Alfons Mensdorff-Pouilly, previously caught up in a bribery scandal, as its undercover agent in central Europe?

· Did it provide exotic holidays and prostitutes to the entourage of the head of the Saudi air force?

· Did it pay £1bn to Saudi agents including Wafic Said, and another £1bn to Saudi Prince Bandar? To every question about what BAE may have actually done, Woolf’s answer was the same: “We weren’t given the job of looking at the past.”

The Guardian also reminded readers that BAE “still faces criminal investigations in London, Washington, Dar es Salaam, Bucharest, Prague, Berne, Budapest and Johannesburg, over continuing multi-million pound arms contracts. Last month Woolf’s former colleague, Lord Justice Moses, ruled that the abandonment of the Serious Fraud Office investigation into BAE had betrayed the rule of law. Moses said there had been an ‘abject surrender’ to threats when the SFO, under pressure from BAE, from the then prime minister Tony Blair, and from Prince Bandar, agreed to drop investigations into the Saudi payments.”

(As an aside, we’re not often on common editorial ground with the Guardian. But its enterprise and leadership on the BAE story show why the somewhat offbeat, trust-controlled newspaper has a reputation for courageous reporting. In the movie, “The Bourne Ultimatum,” an investigative report in the Guardian that mentions Jason Bourne is important to the plot and ultimately leads to the assassination of the fictional reporter. )

The Corner House, one of the public-interest campaigners that won the BAE court case against the Serious Fraud Office, called the Woolf inquiry “an interesting academic exercise. . . BAE should have saved its £1.7m spent on the committee and adopted instead accepted best practice: namely, to employ a law firm as an independent investigator to go through all its internal emails and documents in order to make adequate disclosure to the law enforcement authorities. . . . If BAE is serious about breaking from the past, it needs to show that it is fully cooperating with all the current investigations by law enforcement officers in the UK, US and Switzerland.”

As for our disappointment, we always try to be realistic about public corruption. We know bribery is the second oldest profession and won’t disappear anytime soon. The temptation in business to take shortcuts via well-placed bribes to government officials is powerful. When people fall, as they sometimes will, they and their approving employers deserve punishment. Once punished, though, they also deserve another chance — assuming there’s at least some recognition of wrongdoing (“mistakes were made”). That, after all, is the path to rehabilitation and to a full restoration of corporate citizenship.